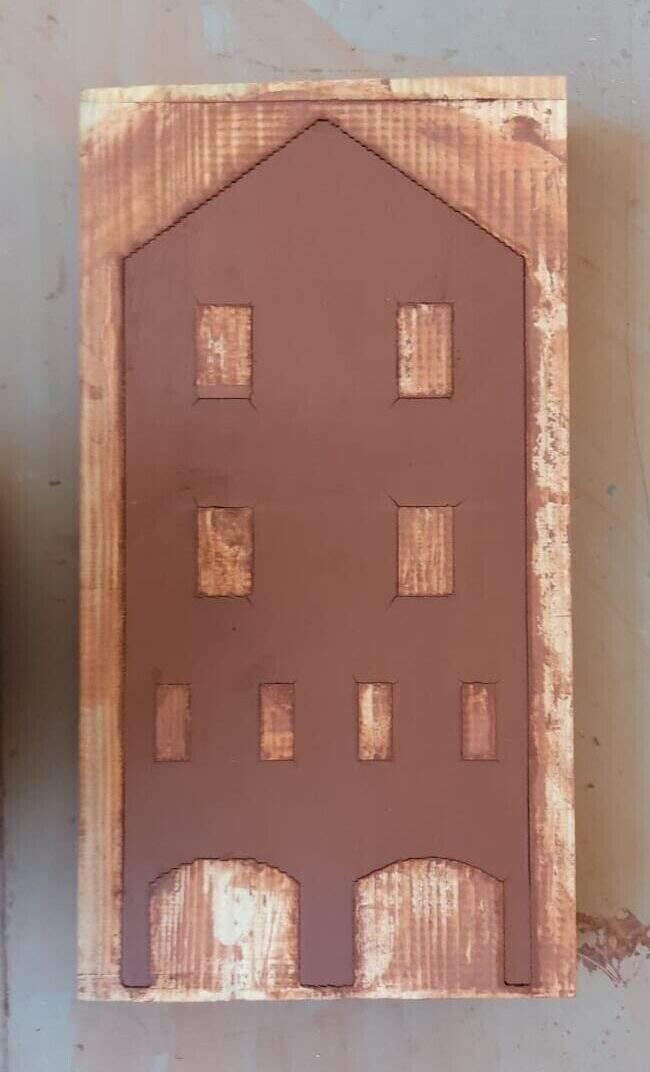 5-Artefact: Material Movement and the Thinness of Things (Fig 1)

The contribution to the CA2RE+Delft Conference builds on work on the Mangalore tile in South India, extending research to brickworks in Scandinavia. This aims to explore reciprocal relationships between materials, people and environments, through a perspective of material movement and the thinness of things. Material movement looks at how journeys of resources, people, products and ideas have shaped building cultures in specific parts of Europe and the Indian Ocean. Thinness, as opposed to thickness, is used as a framework for understanding how and why things are made in particular ways. Thinness relates to limitations of clay, and the materials it interacts with, in its various forms1, as well to the density of tectonic relations such as with mortar, wood, metal, concrete. Conceptualising thinness encompasses the ecology of cultural and environmental relationships that contribute to making of environments of production and products for building. Density is seen as a translator: between building cultures and tectonic systems. This allows meaning to unfold from taking apart the cultural, social, economic, tectonic and pragmatic forces that shape specific products, industries and buildings.

Movement and thinness are critical to all stages of working with clay. Over vast periods of time, the feldspar in igneous rocks breaks down into fine-particle clay: a workable mineral stew resulting from the erosion of the earth’s crust 2. Geological movement contributes to mixing of materials resulting in increased plasticity and workability. Clays that remain at or near the site of the parent material and lack plasticity 3. Sedimentary clays, which have been transported by water, wind and ice and deposited far from the source material contain smaller particles, are more mixed with other materials and subsequently more plastic 4. Material movement, mixing and the subsequent workability of materials is an apt metaphor for cultural encounter and its consequent impact on building cultures.

Extracting and forming clay is, therefore, a reworking the stew from the earth’s crust: analogous to cooking and to a geological re-articulation of the ground5. The Mangalore Tile(South India) gets its deep red colour from the high iron oxide content of the upper lying clay, compared to the lower lying lime-rich blue clay used to make the yellow Flensburg brick(Danish-German border). Mixing of types of clay can take place after extraction, to define the qualities of the finished product, including shrinkage, colour, texture and load-bearing characteristics. Local geology along with pragmatic constraints created strong relationships between the tectonics of the earth and the tectonics of building 6 (Fig 2) with pre-industrial terracotta in India. Products were born out of locally available resources: material, tools, labour, knowledge, expertise and fuel. Thin bricks 7 and roof tiles8 required less energy to produce and could be easily formed and assembled by hand. Consequently, building tectonics had strong links with social structure. According to Anil Laul,

Mechanization of terracotta industries in India and Europe standardised production of bricks and tiles: selectively thickening forms and lightening loads of products and factory architecture. For the Mangalore tile(Fig 3), from 1865 the Protestant Basel Mission introduced tile-making technology from Europe(Fig 5) to create an interlocking roof tile in India. In combination with British building of Public works, the tile disrupted the hierarchy in the use of building materials. Up until the end of the eighteenth century use of terracotta tiles was limited to roofing buildings such as temples and palaces 10, with lower social groups restricted to thatch construction. Changing rules along with the relative afford-ability of the tile enabled a broad spectrum of people to use the Mangalore tile to build houses, railways stations, institutions and religious buildings. The resulting proliferation of the tile marked a widespread tectonic shift: the thicker Mangalore tile replaced dense layers of thin materials(thatch and potters’ tiles) to create a lighter, more durable roof. The tile defines an alternative thinness of things, and the factory buildings are themselves a densely interwoven structure of terracotta, timber and steel anchored by the kiln in a tectonic balance of thinness(Fig 4). 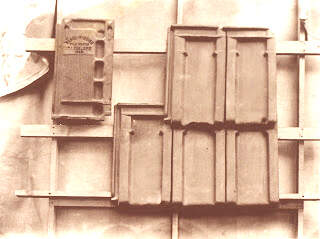 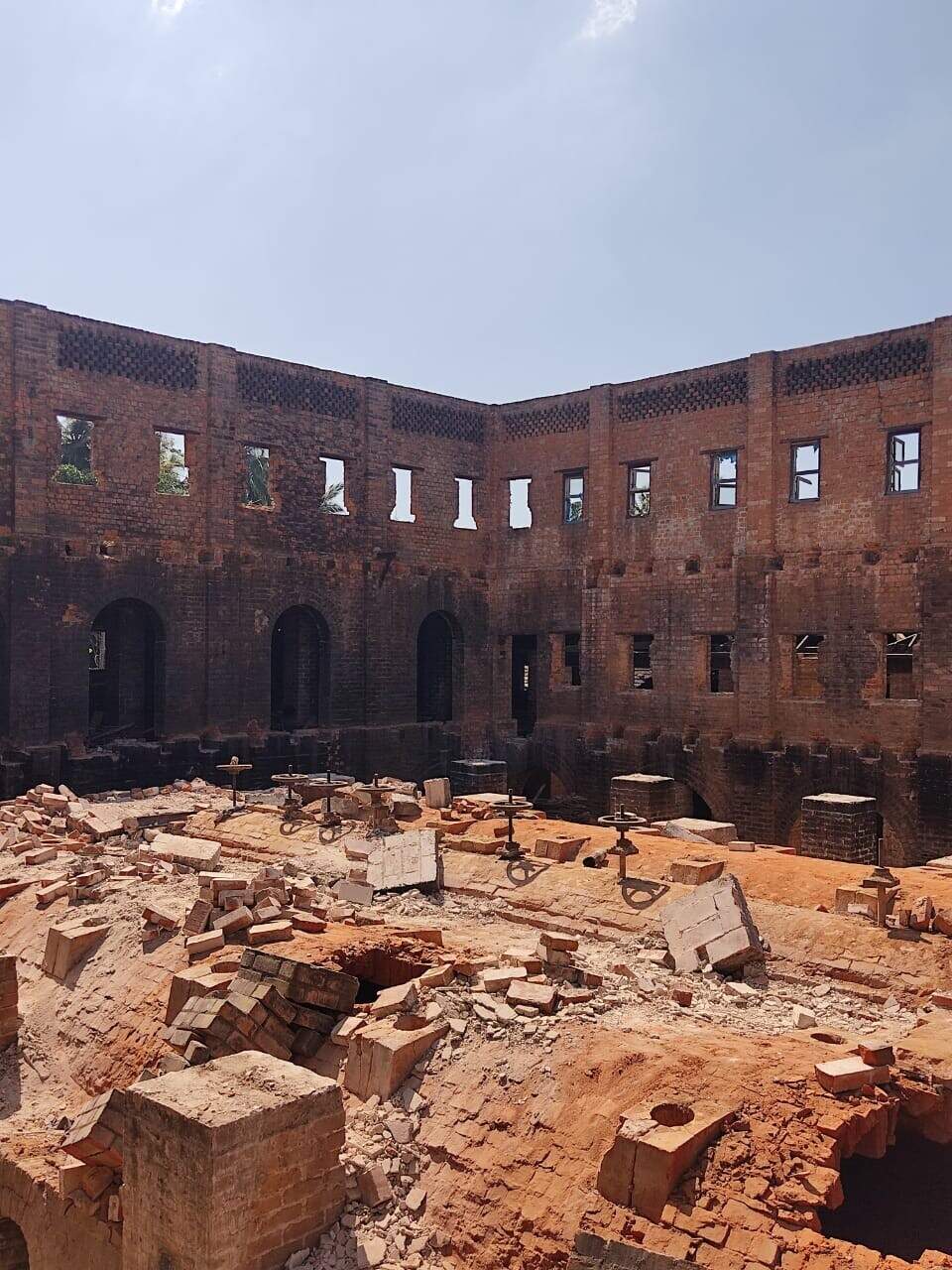 The Flensburg brick(228 x 108 x 40mm) emerged in Europe at the end of the sixteenth and through the seventeenth century as a thinner alternative to the heavy medieval brick(270 x 130 x 70mm). Smaller, and easier to handle with one hand, it is said to have almost halved the work of the mason – and more than doubled building speed 11. Brick sizes became more standardized from the end of the eighteenth century, seen in the Danish Normal Format(DNF:228 x 108 x 54mm) 12. In the contemporary context of the Nybøl Nor brickworks, production of the Flensburg brick and newer Kolumba brick(528 x 108 x 40) are signs of a contemporary movement towards thinness. This coincides with a shift in the role of clay in building in Denmark from structure(masonry) to surface(cladding). Bespoke, coal-fired brick production at Petersen Tegl, Broager utilises technology to achieve the thinness and handmade qualities of pre-industrial terracotta. This conference contribution will interrogate how building culture can relate to the conditions of encounter, precarity and efficiency from which the thinness that is aspired to emerged. 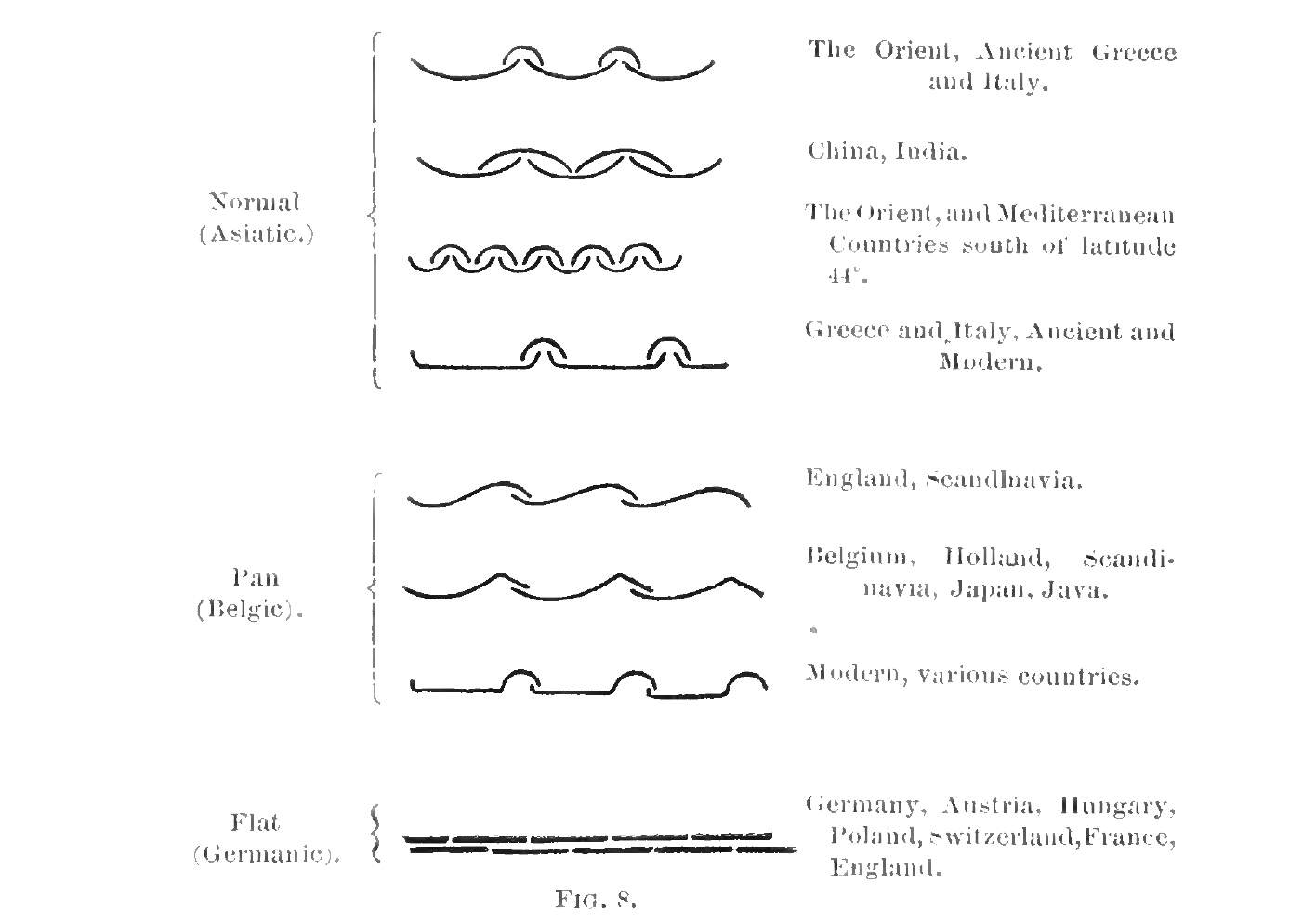 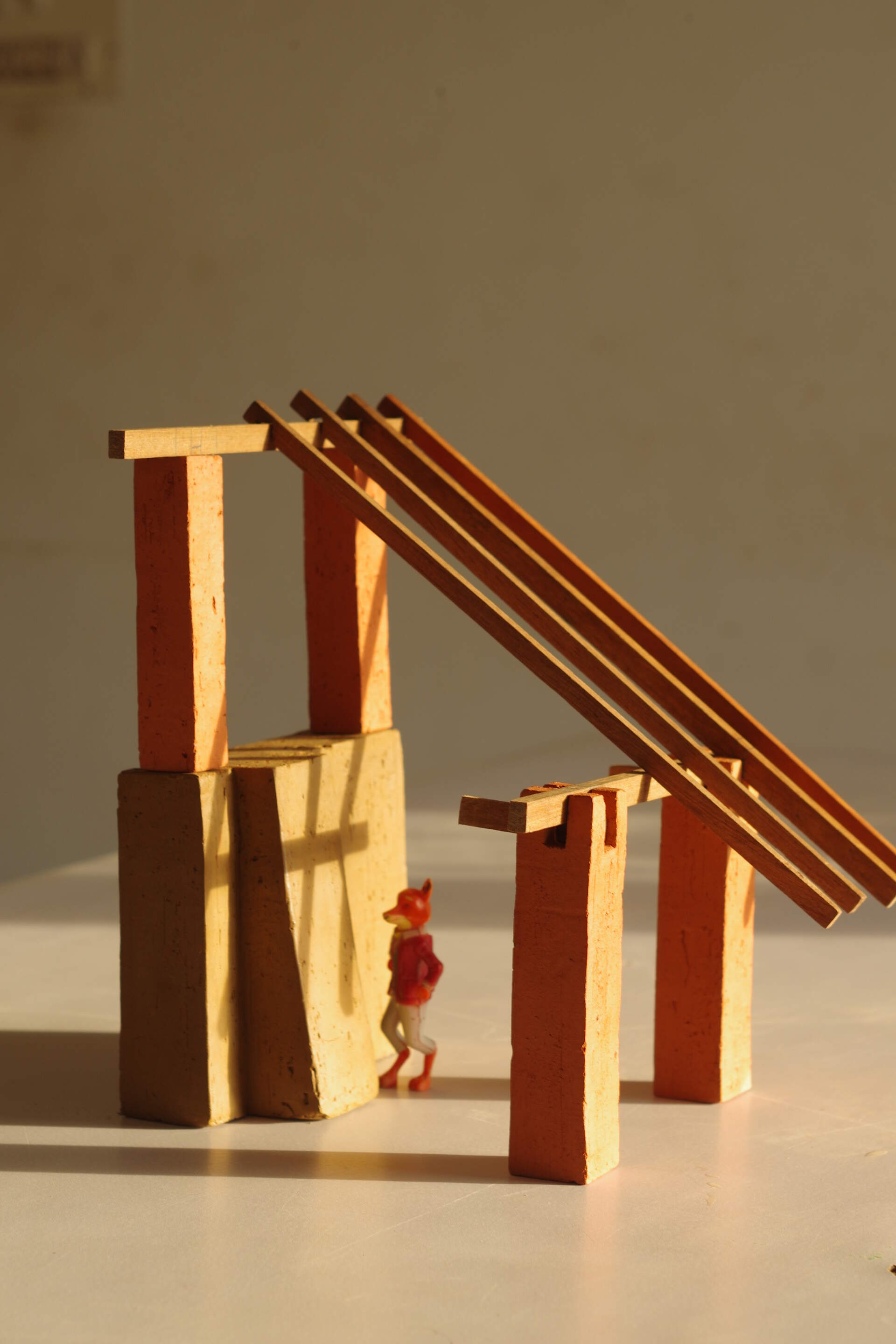 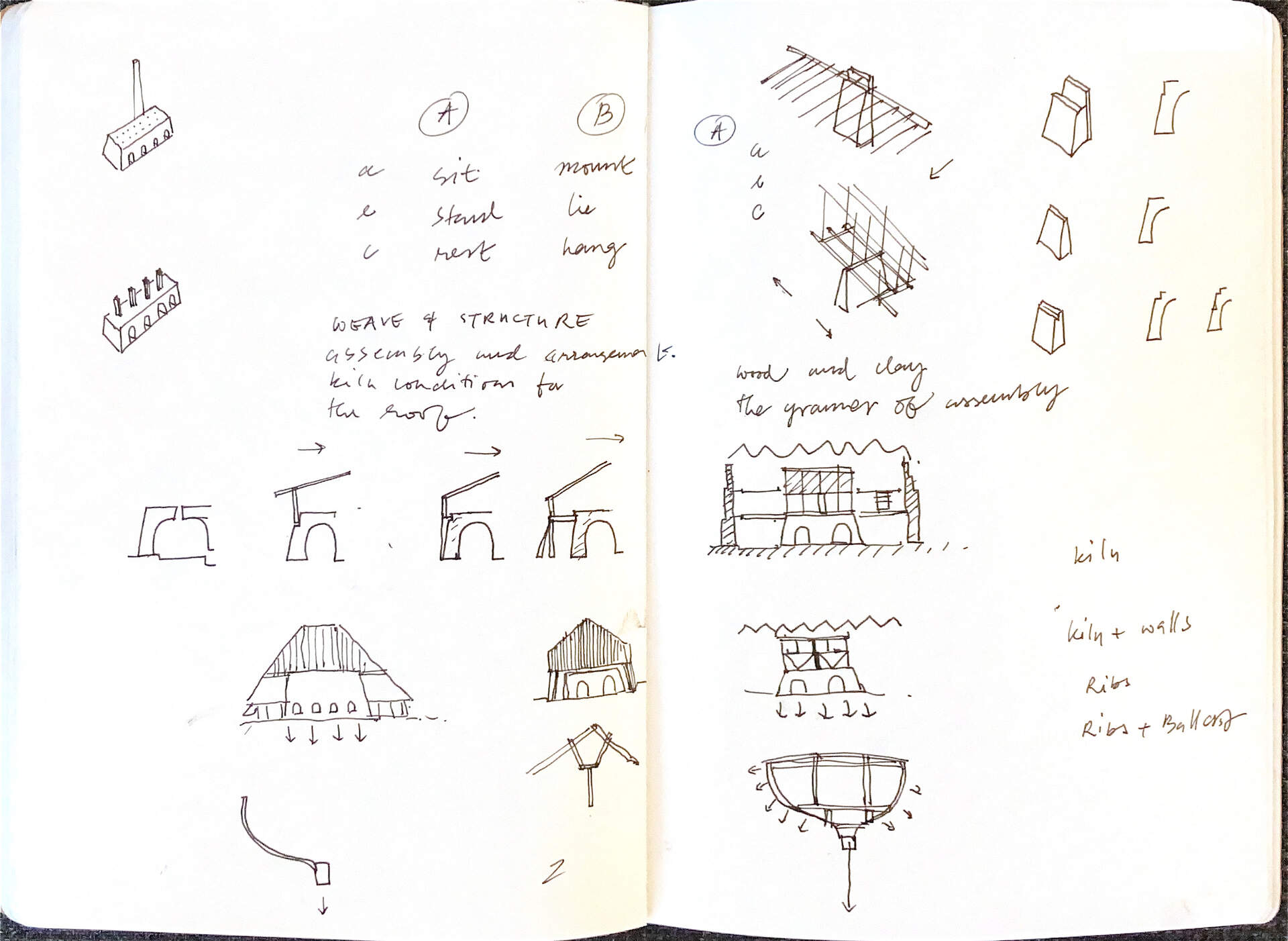 Work(Fig 6, 7) presented at the CA2RE+Delft Conference examines tectonic operations of thinness by exploring how environments of production are made. The artefact explores reciprocity in material relationships expressed in the grammatical operations of wood and clay. Tectonic relationships of terracotta factories are abstracted as a weave: an interdependent balance that allows parts on the one hand to mount, lie and hang and on the other to rest, sit and stand. Within the assemblage, wood and clay operate as counterpoints: manifesting concentration of thinness and mass through the relationships between weave and anchor. This relates to the role of the kiln in anchoring the factories and the role of ballast in the buoyancy of ships used for maritime exchange. Implicit within this a relationship to geology(through extraction) and maritime archaeology(through deposit). In various factory conditions the kiln plays a similar role, but what differs is the relationship to what is around it, expressed particularly in the structural redundancy of enclosing walls. The abstracted condition of the artefact relates to observations of the relationships between anchor and frame but carries meaning beyond a specific construction(Fig 8,9). Consequently, the artefact is seen as a vehicle of research: carrying knowledge of how and why things are made through reciprocity and fusion of properties. 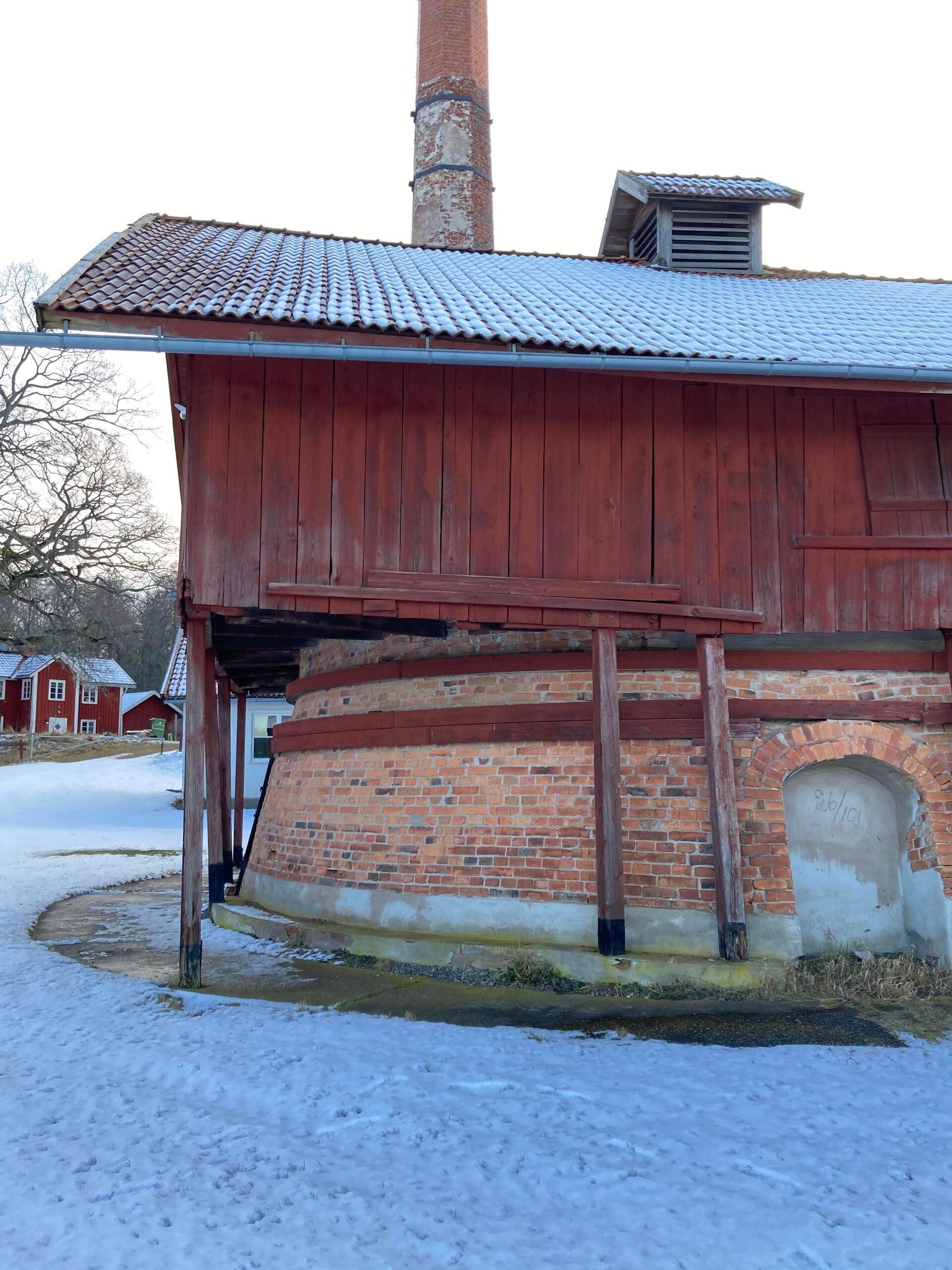 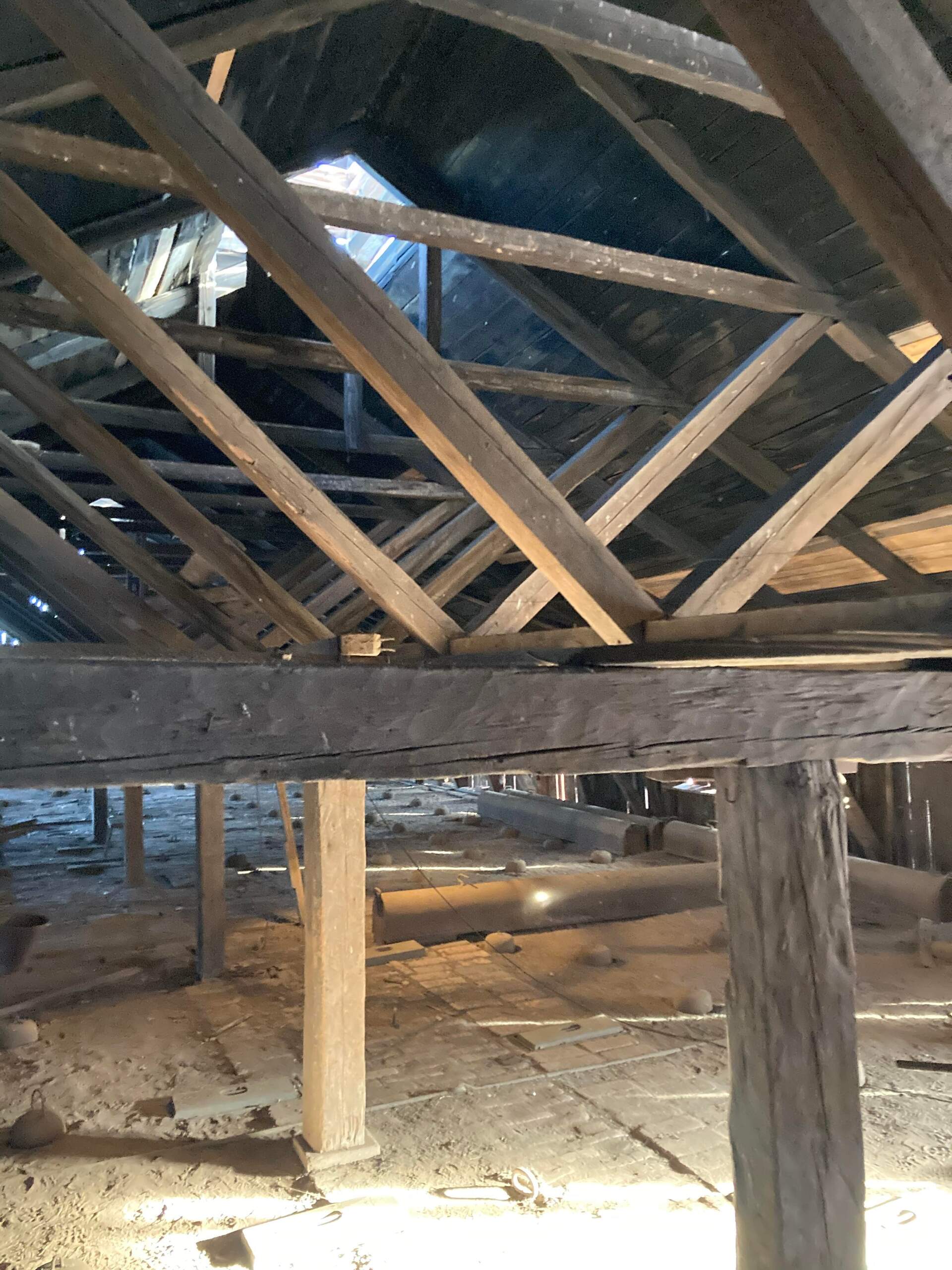 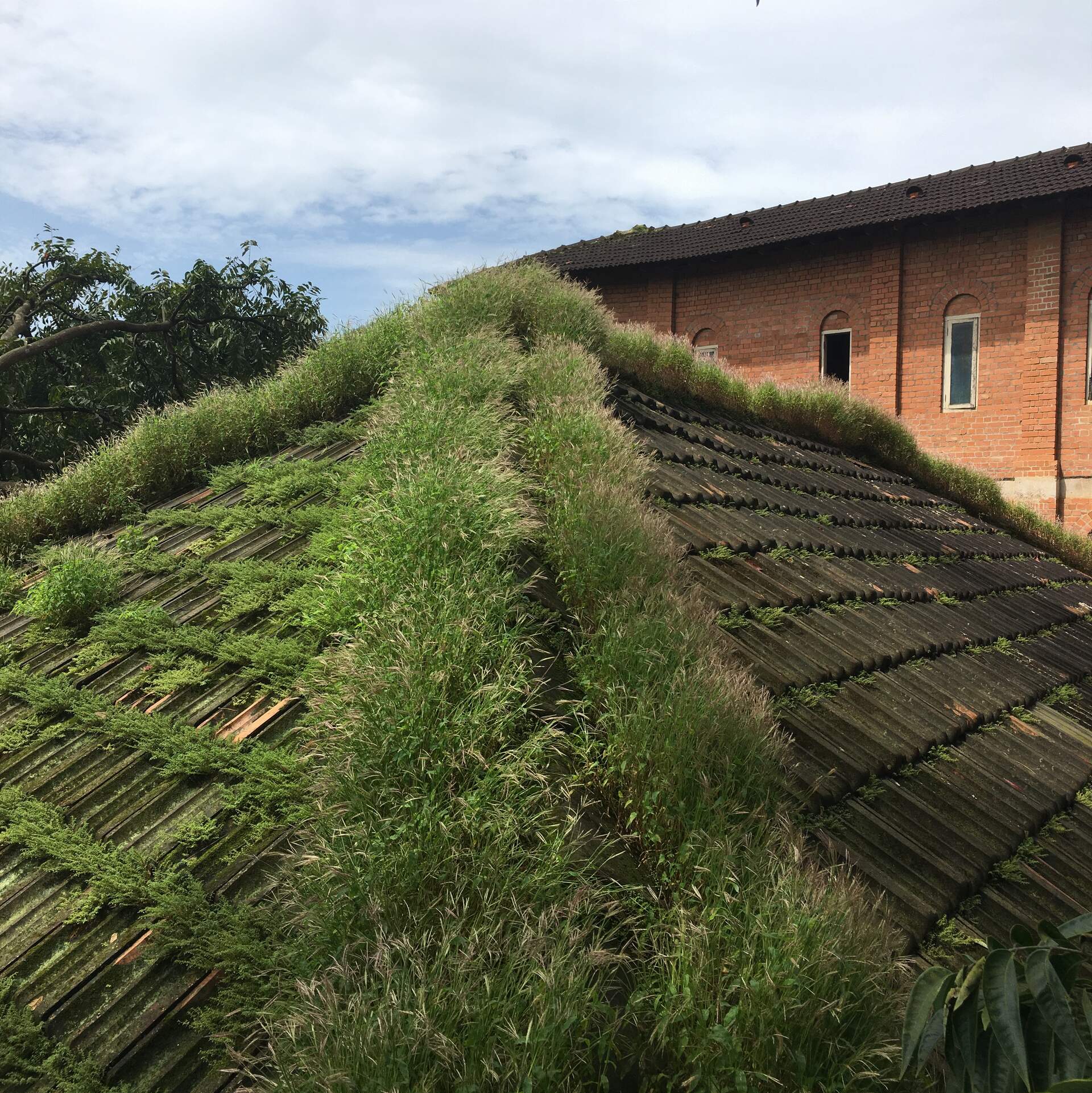 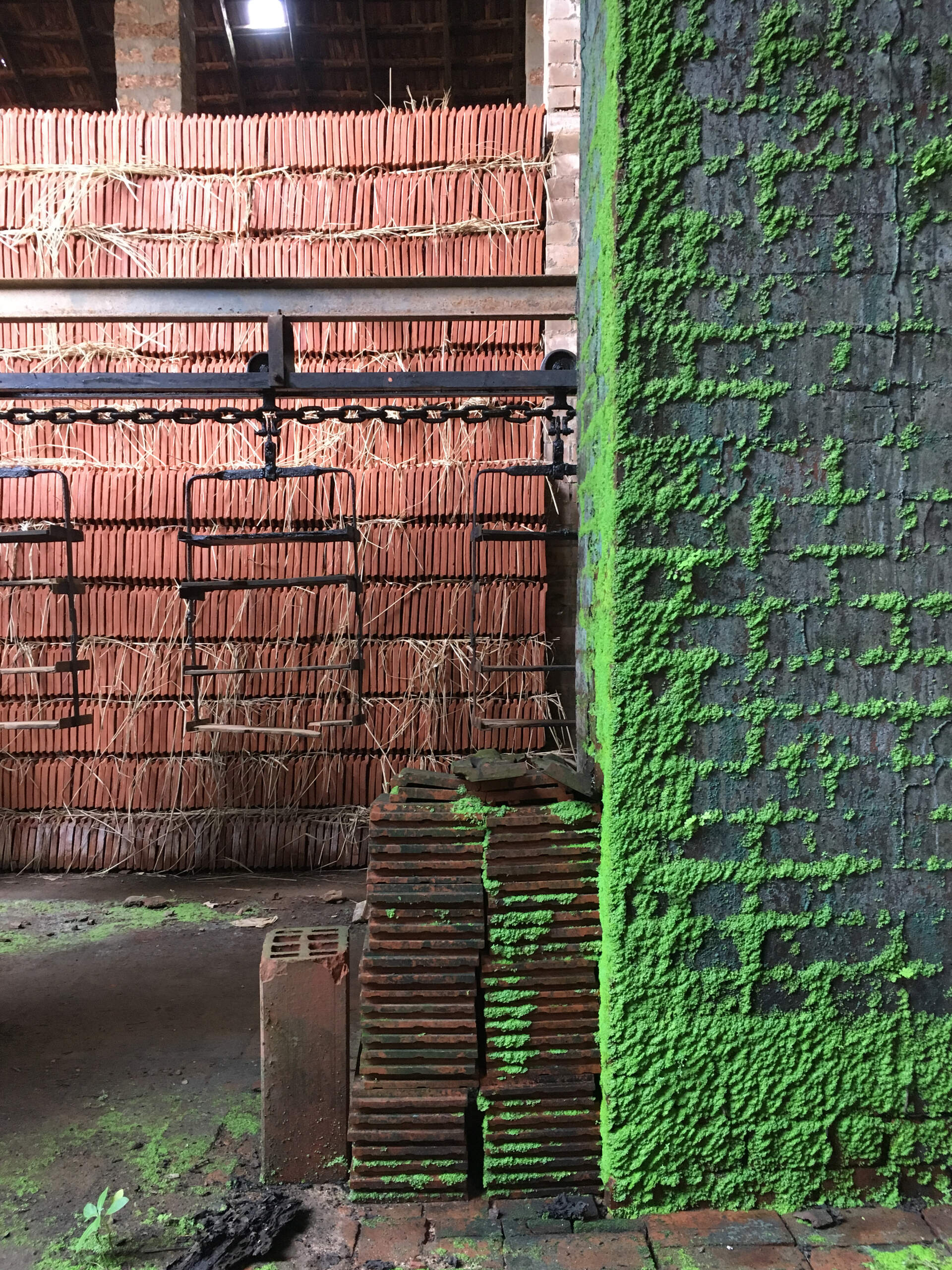 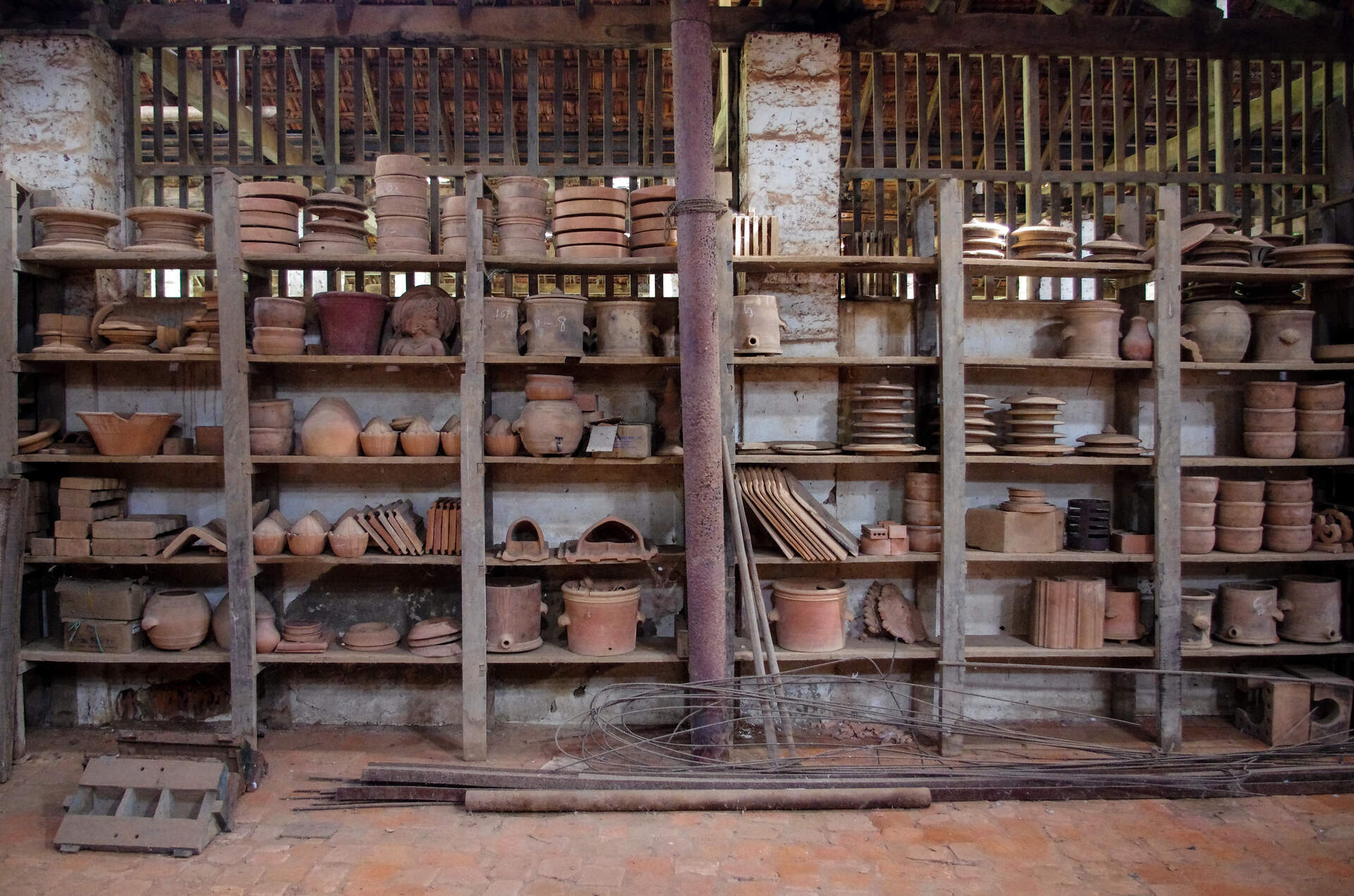 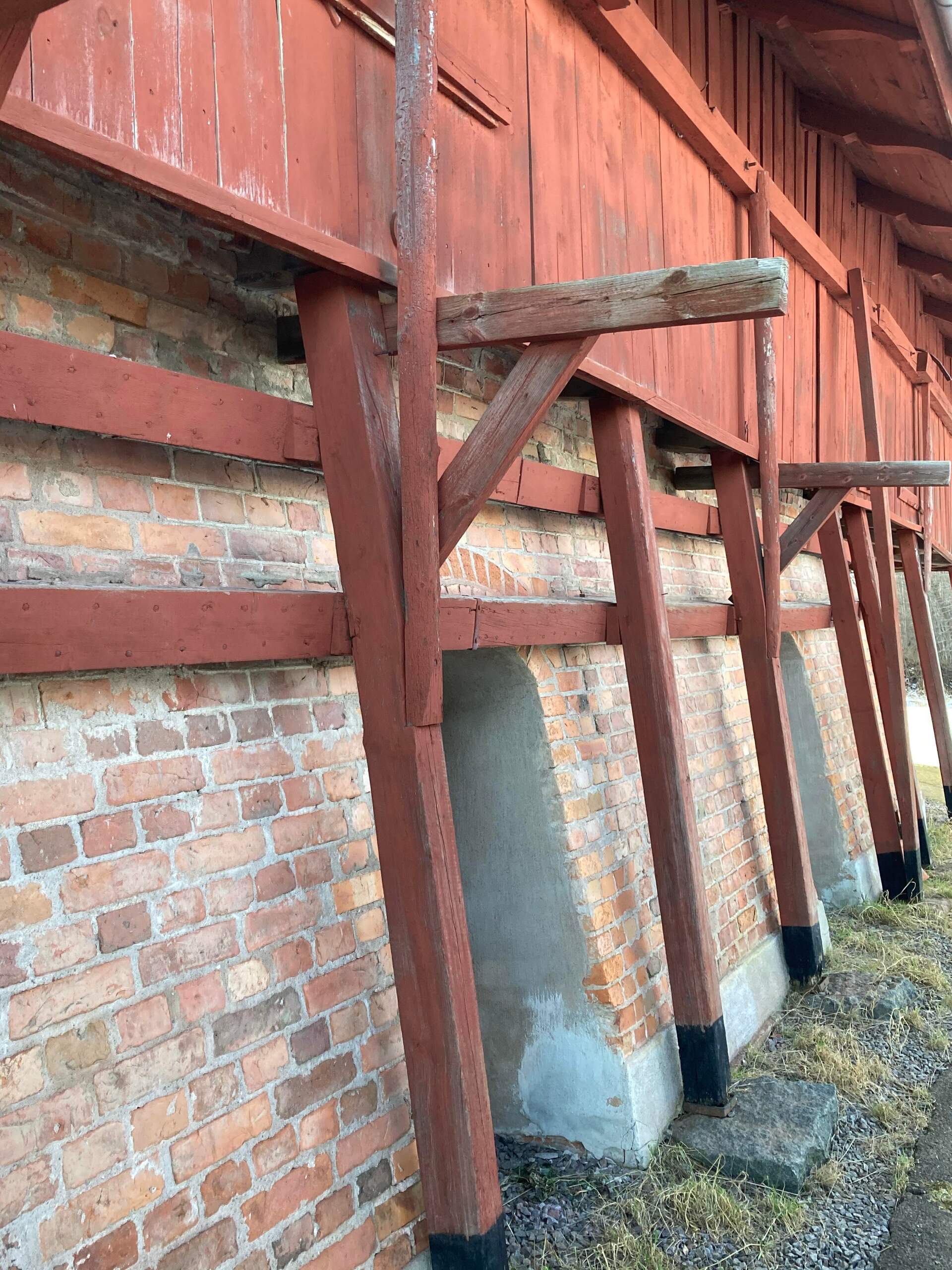